Paul and mysel left Somerset West on the 1st of July 2011 after getting the car sorted with Dewald at Winelands 4x4 and many others that helped organize the trip, the Fortuner looks awesome and is fully loaded.
The first leg of the trip was along the SA coast up to Knysna then the Transkie with Paul and myself. In Durban we collected Maggie my wife and Mikayla my daughter, with my uncle and aunt in Durban. 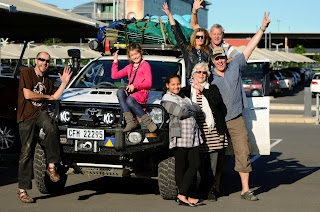 From there we loaded the Fortuner even more and squeezed in for a 2 hour trip up too St Lucia, where we camped at the Sugarloaf campsite for the week. What an amazing part of SA would definitely like to come back again.


The Imfolozi game reserve was a pleasant surprise, we saw loads of animals 4 of the big 5 and had a awesome day together. One of the highlights was seeing loads of Rhino a mother and baby. We were also charged by Rhino on the way out of the park and nearly did not escape. As we arrived back at camp there was a hippo in the parking lot. We had an amazing oxtail potjie that evening for supper that Paul and myself had been cooking for 2 days.